I sit in the Wendy’s, seated so I can see the parking lot of the convenience store next door. It’s like I am an undercover cop waiting for a drug deal to go down. It’s nothing close to that illicit, it’s simply the exchange of a child from dad to mom.  Even though The Cowboy and I now live together, I don’t participate in the exchange.  Does it bother me that I can’t be in the car when he meets his son’s mother to pick up or drop off?  Not really.  I have been down that road, and remember the whole situation being extremely uncomfortable, when newly divorced, my ex and I would make the exchange.  My ex and I have been past that for quite some time, and co-parent our son quite effectively, but that comes with the passing of years, and released anger, and often, with new love.

For some reason though, today the waiting bothers me.  It bothers me as she steps out of the vehicle in a dress.  I wonder about the dress.  Is she wearing it for The Cowboy?  Or has she come directly from seeing a new man in her life, and it was worn for his benefit instead?  My mind begins to race, swirling with insecurities; once that particular tornado starts, it is nearly impossible to stop.  I watch The Cowboy place his son in his mother’s backseat and strap him in.  The Cowboy’s son has lit up the house for the last week with his laughter, and his voice, as only the wonderment of a 4 year old can do, and I will miss him.

The hour and 15 minute ride home feels much longer, as I try not to let The Cowboy see my insecurities, or hear them when I open my mouth to speak.  I keep trying to tell myself in my head that I am good enough, that I am just as pretty, or prettier, than her, that I am more educated than her, that I have a better job, that I own my own house.  But none of those things matter in this card game, because she trumps me every time.  She is the mother of his child; his only child.  I am just the girlfriend.

I eventually speak to The Cowboy of my insecurities.  He has sensed them, but didn’t ask about it.  He does what he can to reassure me.  He tells me again, he has no desire to get back together with her, he is just trying to keep the peace with her, for fear of her withholding visitation of his son from him.  I tell him I understand, as I have seen how inconsistent she can be.  I never want to come between him and his son.  I would never do anything to jeopardize their relationship.

So I shall wait.

As long as it takes.

For two individuals to heal themselves.

In order the be the best co-parents to their son they can be. 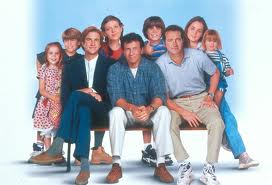 Bye Bye Love – The best movie I have ever seen about how heart-wrenching raising kids after divorce can be. But it also lets you know that love can heal all.

Posted in Family, Relationships and tagged being respectful of the kid exchange, breaking up is hard to do, Bye Bye Love, co-parenting effectively, the kid exchange is the hardest part