My Last Name is Control 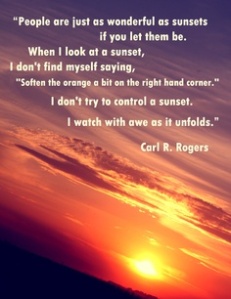 He’s said it more than once, “You kind of like to control everything, don’t you?”  It’s true, I do like to be in control.  I was what many would call a “bossy” kid, and I suppose this has led to me being a “bossy” adult.  I am a leader, not a follower, and will attempt to manipulate people to come to my dark side, and do as I wish.  And if I can’t use the art of persuasion to get you to do what I want, or see my side of things, then at times I will try to force you to.

Problem?  He doesn’t want to be controlled (most people don’t).  He has made that very clear, yet he always seems to hand me his problems, seeking my advice and guidance.  Is he aware you shouldn’t hand a fixer such as myself, a problem and not expect me to give you numerous solutions?  I guess he must not be.  He told me last night I sound like his mother.  That’s exactly what every woman wants to hear.  I told him I don’t want to be his mother, but was just trying to make a point.

He says I am a debater, that I can’t just say something and let it go.  It’s true.  Why do I feel the need to justify myself to everyone?  I think it’s because of my need to control.  I want to influence people to understand why I feel the things I do, because I’m not okay with feeling it, saying it, and letting them deal with.

Control is an illusion.  I can’t control another human being, unless they allow me to, and to be honest, I don’t really want to control anyone, let alone a man I am in a relationship with.  I want to be comfortable enough in my own skin, that I can let go and allow life to happen.  I want to release my worries and anxieties, and allow people to make their own choices about things, and live their lives the way they see fit.  Some days letting go of control is easy for me.  Other days, it isn’t so easy and I battle it.  I think I need to keep this quote handy, to remind me neither sunsets, nor people, will be beautiful if I attempt to manipulate them.

Posted in Relationships, Uncategorized and tagged can't you just do everything the way I want you to?, control is an illusion, like trying to control the wind, master of manipulation

14 thoughts on “My Last Name is Control”