You Guys are Craptacular!!

I work in the construction industry, and a large number of my co-workers are men.  In fact, almost all of them are men.  Trust me, most of the time I have no problem with this, as men are much quicker to forgive than women, and don’t tend to be backstabbing, conniving whores who think you’re trying to steal their job/significant other.

The downfall of working mostly with men is the smell. The question at the forefront of my mind most days is, “Don’t you ever shit at home??” I swear these guys save their shit so they can do it at the office. I understand that every once in awhile you’re going to have to take one of those out of the ordinary kind of craps. You know, the ones that sneak up on you after you put the two taco lunch you had at the local Mexican eatery on top of the numerous beers you had the previous night while playing shuffleboard with the guys after work? But every day of the week??

Guys, is your gut built different than women’s? I don’t know about the other ladies out there, because most women don’t sit around and talk about poop like I obviously do, but I am a once a day kind of girl, and my preference is to do it before I get in the shower. Most women don’t even like to shit in public places, and will only do it as a last resort and if they’re seriously going to crap their pants before they make it home. It is clear, after studying male pooping habits, this is not the case with most men, and they do not share these “poop-phobias” with the fairer sex.

The guys at the office will sometimes spray to try to cover up the stench, and even leave the fan running as a kind of courtesy, but we work in a trailer, so it really doesn’t help much. The walls are paper thin in this place; you can hear them reeling the damn toilet paper off. When I hear this sound, I have a learned reaction now–I know I need to light the candle.

Maybe for Christmas this year I need to buy the guys kind of a group gift as a tribute to all the crap-tacular dumps they leave in that nasty ass bathroom of theirs. 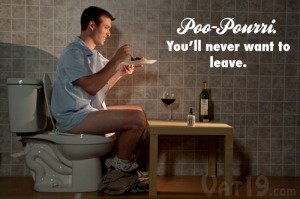 Posted in Uncategorized and tagged amazing, craptacular, do you ever shit at home?, poop-phobia, working in construction, yes women poop too

17 thoughts on “You Guys are Craptacular!!”