I hate election years.  Especially when my options leave me feeling like I would be voting for the lesser of two evils when it comes to the Democrats and the Republicans.  I am from a state that almost always casts their electoral votes for a Republican.  Seriously, since 1864, there are only a few years the votes have gone to any party other than the Republicans.  Does this indicate we’re not a progressive state?  Maybe a little.  Don’t get me wrong, I have numerous friends and family members who wouldn’t think of even nodding in the way of a Democrat, but that’s not me.  I have nodded at, and I have even voted for a couple of Democrats.  This year is going to be different though.

I am not overly impressed with Obama, and frankly, Romney scares the shit out of me.  I know both of them are basically puppets, with the hands of their respective parties shoved far enough up their asses, they can make their mouths says whatever they want them to, but I just can’t excuse them for that.  The petty bickering, the name calling, the mud-slinging and trash talking. . . .just done.  For fuck’s sake, these people are supposed to be educated grown-ups!!

So this year, I am giving my vote to a different party–the Libertarians.  Why, you may ask?  Because this country is going to hell in a hand-baske!.  We are quickly becoming a nation of simpering, ne’er do wells, many of whom only want a hand-out and not a hand-up.  Too many of us choose to sit back and bitch about change, but are too cowardly to do anything to try to bring change about.  Have we forgotten this is supposed to be a democracy?  At one time this country was built on principals, morals and freedoms.  Where have those ideals gone?  These things have occurred under the leadership of what?  Democrats and Republicans.  Somehow I don’t think this is the nation our founding fathers had in mind, do you?

In the immortal words of George Washington, remember—“An army of asses led by a lion is better than an army of lions led by an ass.”

And if you’re interested in retaining your rights as individual, go check out the Libertarians platform:

Sorry guys, but I know a free lap dance is an extremely good motivator for most of you!  😉 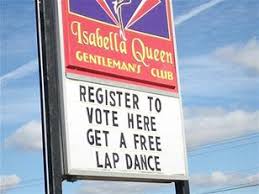